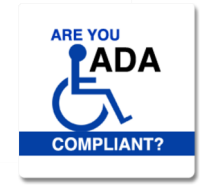 As you may know, the Americans with Disabilities Act became law in 1990. At the time, it was directed only at eliminating physical barriers for people with disabilities. Recently, however, it has been interpreted to apply to websites. It was back in 2010 when the United States Department of Justice announced it was going to develop rules that would apply accessibility standards to websites. However, the DOJ never actually got around to doing that.

Instead, in December 2017, they formally announced that they weren't going to issue any rules. They reasoned that, since there was already a growing body of civil case law about website accessibility, they felt that would suffice.

This past January a mom-and-pop hardware store in San Antonio got a letter from a law firm in New York notifying them of a lawsuit because their website was not accessible to people with disabilities. The lawyer had a client, he said, who was blind and was also from New York, who had tried to order a hammer on their website and was unable to do so. They smelled a setup, but what could she do? She elected to pay the lawyer the $20,000 he demanded, figuring it was cheaper than going to court.

A key point to understand is that the Department of Justice made a statement in September 2018 that made it clear that websites do not need to be strictly compliant with WCAG standards. If they are reasonably compliant, they meet the standards imposed by the Americans With Disabilities Act.

There are a lot of theories floating around about what, exactly, is required to make a website accessible. Some companies are offering plug-ins they say will do the trick, each costing a few hundred dollars a year. And then there are accessibility "experts" quoting four- and five-figure fees to do the job — with maintenance costing hundreds of dollars per month.

What About the Accessibility Widgets?

You may have heard there are some widgets that can be installed to help make a site accessible. These widgets allow the visitor to adjust the contrast, text size, and other website elements. Some of them will convert the website into a bare bones text-only website when the user clicks them. These tools address some of the major accessibility issues, but not all.

Anas Khan
08:32 25 Oct 21
We're satisfied with our completed website marketing and website design. We love this website. Smart and friendly. I... think they do excellent work.read more

Ahmed Qurashi
19:39 23 Oct 21
Rich was professional, efficient, and delivered an amazing product. He integrated the information I wanted to be... included and the look I was going for in the website and created an outstanding final product. I was so pleased with my experience, and I will definitely be working with them in the future!! 10/10 would recommend!read more

Zia Bakar
11:37 23 Oct 21
Rich's Web Design did an amazing job revamping our website. We had a very specific design in mind and they pulled it... off effortlessly and effectively. Would highly recommend it to anyone looking for professional guidance on a smooth, attractive, and appealing web presence.read more

Round Jobs
19:15 21 Oct 21
Service was quick and as promised. The prices were very reasonable. Very friendly and accommodating. Would highly... recommend it.read more

naveen mohsin
20:06 20 Oct 21
I am happy with our amazing website online store. We love our website. They know what they are doing! I recommend them.... Glad that I called them. Price is good too, Thanks!read more

Salman Hussain
11:57 08 Feb 21
Rich is awesome! thank you for help in designing my website.

Rindy Beock
03:46 12 Jan 21
I've been working with Rich and his team for several years. First as a developer, then maintaining our website and now... with SEO. He has always been helpful going above and beyond. I value our partnership and trust her to steer us in the right direction. He is a great person to brainstorm ideas with too!read more

Kathy Hunter
15:51 06 Jan 21
It's rare to find a business partner that provides exceptional service at a very reasonable price, but that's exactly... what you get with Rich's Web Design. They will provide you with creative, design, website development, photo and a full suite of interactive services at the highest level of quality, Highly recommends them.read more

christhoper levesque
14:34 05 Jan 21
Awesome experience with this company every time. Rich's Web Design has done several websites for clients of mine, and... their work is ALWAYS something I'm proud to present. Their designs are always compatible with any device, and their knowledge, price, speed and service the BEST!read more

Muhammad Danish Khatri
12:24 05 Jan 21
Such a great experience! Rich's and his team did a fantastic job and provided amazing customer service. Such great... quality and attention to detail. Can't wait to work with these guys again!read more

Will Snyder
20:46 14 Apr 20
Rich performed a fantastic upgrade of my law firm's website. I would highly recommend him to anyone needing a... high-quality professional website.read more

Kendra Gallman
22:04 14 Oct 19
Really happy with the design and function of my website. Thanks and do Recommend!!!

Julie Surprenant
13:28 24 Sep 19
Rich did a great job helping us refresh our out dated company website and has been great with helping us with small... updates along the way. Excellent communication and desire to help.read more

Lynn Pace
19:01 31 Jul 19
Rich redesigned our site to give a better scope of what we do and continues to update our site on a regular basis. I... would highly recommend him because of his knowledge and professional service!read more

Darlene Kaplan
23:08 15 Jun 19
Rich has been very prompt in taking care of problems on my web site created by a previous web designer. Rich’s Web... Design is a professionally run business and I could not be happier with his service. I would highly recommend Rich.read more

Trevor Brindle
14:09 04 Jun 19
I visited this site on my phone and regretted it. It was so incredibly slow. Over 20 seconds before the site was... loaded. https://www.ncchamberorchestra.org/I used a tool in Chrome called lighthouse to audit the site, and was surprised because I've never actually seen a 0 out of 100 before on performance.I'm sure this firm is professional and communicative, but it leaves a bit to be desired on mobile performance. They charge a lot of money to not care about mobile loading speed.read more

Nikki Barber
21:06 22 May 19
Rich has assisted the Barber Center for Plastic Surgery with our website development and management needs for more than... 10 years now. He's quick to respond when we have questions or needs and is very easy to work with. His newsletters are informative and he keeps us abreast of the ever changing cyber world and the things we need to do to stay current. I would highly recommend Rich's Web Design.read more

Leo Daniel Corder Jr
20:46 03 Dec 18
This firm designed the municipal web site for the Village of Tobaccoville professionally and timely. The business... offers hosting services as well as ongoing updates and technical assistance. Rich was very adept at creating a customized site to meet our needs and those of our citizens.read more

Paul Manz
14:42 25 Jul 18
Rich's Web Design did a fabulous job creating the website for the NC Chamber Orchestra. He made sure the site was user... friendly, yet comprehensive. He is extremely responsive to updates and corrections (usually caused by me). I would highly recommend Rich for any services they offer.read more

Ray Eller
14:49 17 Jul 18
Rich is an excellent partner for our Web Site maintenance. Not only did he do an outstanding job with our page design... but his company is great about monitoring and recommending updates. He is also always available for changes and timely answers to our questions. I would highly recommend him for any web based project.read more

Bruce Boyer
00:06 13 Jul 18
I have worked with Rich Blakemore for about 10 years, both in a business and personal setting. He is the quickest to... respond to my needs of any website administrator. He always goes above and beyond to provide assistance. When he did our website for a community organization he would come and take pictures of an event and post them within the hour. That's service!read more

Canyon Clifton
18:15 02 Jul 18
We have been working with Rich for over 10 years! Best web services and speedy timing on all updates! We appreciate his... services and attention to detail. He always keeps us ranked #1!read more
Next Reviews
Resources